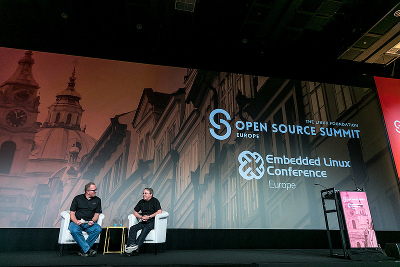 For any system to survive it must figure out how to bring in new members. In this keynote, you’ll hear from Keila Banks who since 11 years old (now 15) has been speaking at conferences around the world; and her father Phillip Banks, who’s been programming since he was 10 and provided the same path for his children. Along with 3 other sons, they have all been a part of technology efforts and open source communities since their youth. Hear from a teen how you can help grow open source communities and youth involvement from what we’ve learned along the way. Keila Banks is a 15 year old programmer, web designer, entrepreneur and international speaker. She started programming at 9 and has been traveling the world speaking on being a young girl in tech. At age 12 she won the Young Entreprenuer of the year award beating out people much older than her. Since then, she’s been recognized by the mayor of Los Angeles, Long Beach California and presented in 2016 at the White House as an example of great things our youth are doing in technology. Coming from a tech family, she loves and embraces many forms of technology without letting it get in the way of just having fun being a kid.

The Tao of HashiCorp are the guiding principles for the vision, roadmap, and design of HashiCorp tooling. It represents the product design ideals that are most important to and represented in HashiCorp products. In this talk, Mitchell will explain the reasoning and implementation of the Tao.

Deploying Open Source software, including though not only Linux, into industrial environments creates a number of challenges. While some of them are common to many domains, some remain specific. This talk will walk through topics like the need for stable code bases and their long-term maintenance, upstream first and open-sourcing strategies, license compliance efforts as well as change management aspects when not only using but trying to breath Open Source in an industrial environment like Siemens is covering.

A Conversation with Linux and Git Creator Linus Torvalds

The storage device is considered a bottleneck to the system I/O performance. This thinking drives the need for faster storage device interfaces. Commonly used flash based storage interfaces support high throughputs, eg. eMMC 400MB/s, UFS 1GB/s. Traditionally, advanced embedded systems were focusing on CPU and memory speeds and these outpaced advances in storage speed improvements. In this presentation, we explore the parameters that impact I/O performance. We describe at a high level how Linux manages I/O requests coming from user space. Specifically, we look into system performance limitations in the Linux eMMC/UFS subsystem and expose bottlenecks caused by the software through Ftrace. We show existing challenges in getting maximum performance of flash-based high-speed storage device. by this presentation, we want to motivate future optimisation work on the existing storage stack.

Upgrading an embedded system is complex – security, power cut, resources must be taken into account for both local and over-the-air (OTA) updates. SWUpdate is a framework that can be customized to the project’s needs. In this presentation, Stefano will list several use cases using this framework and explain in depth, how to set up SWUpdate for each case and how to build the update images with Yocto. As SWUpdate’s author, he will summarize the history of the project and present a roadmap for future developments.

Have you ever wondered how Linux containers work? How they really work, deep down inside? Questions like: How does sVirt/SELinux, SECCOMP, namespaces, and isolation really work? How does the Docker Daemon work? How does Kubernetes talk to the Docker Daemon? How are container images made? In this lab, we’ll answer all these questions and more. If you want a deep technical understanding of containers, this is the lab for you. An engineering walk through the deep, dark internals of the container host, what’s packaged in the container image, and how container orchestration work. You’ll get the knowledge and confidence it takes to apply your current Linux technical knowledge to containers.